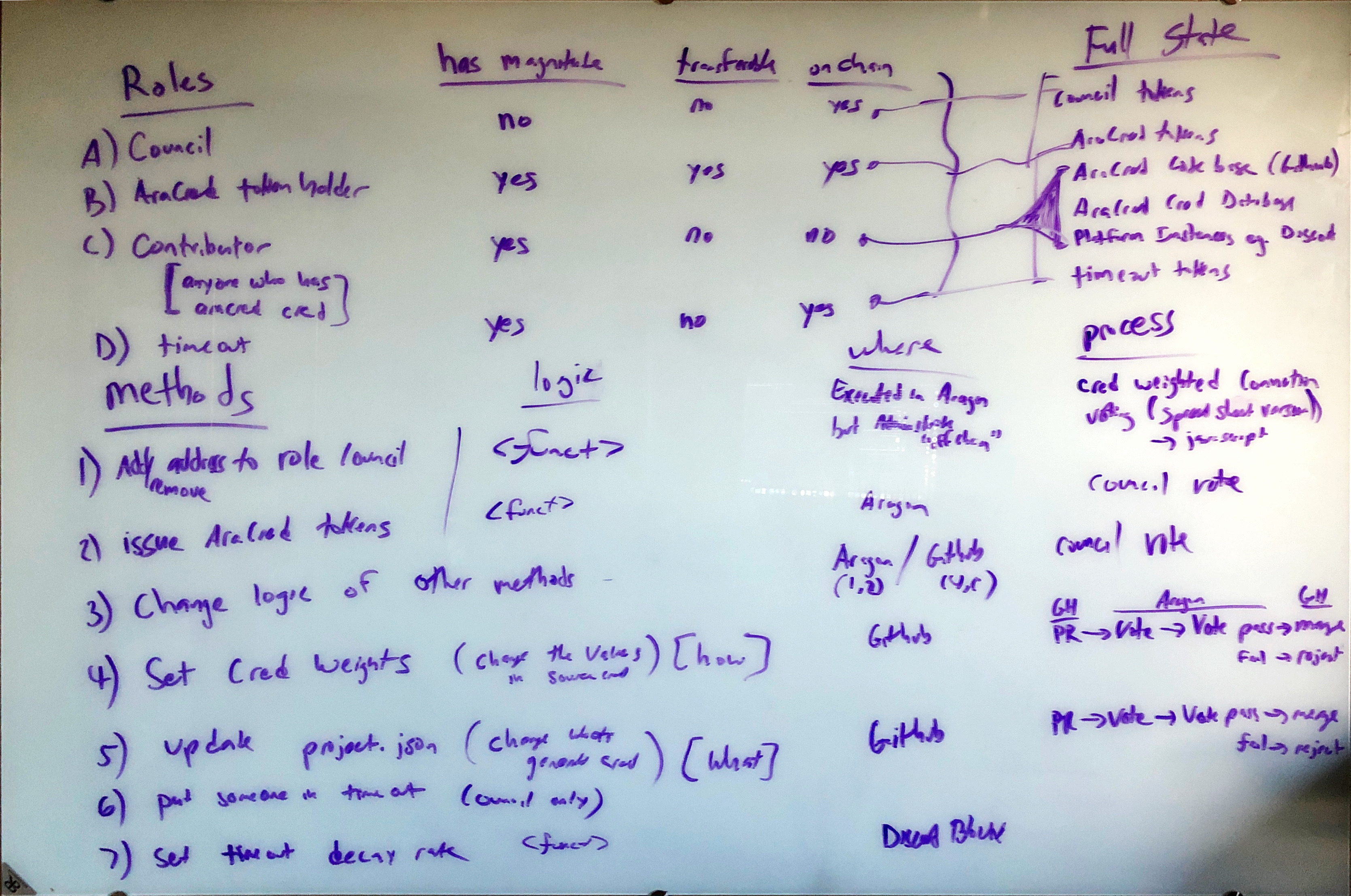 Note: the picture comes in about half way through the video.

We explore a minimum viable institutional design pattern based on a rights, access control paradigm.

Lots of things can happen off chain, but for small communities we can still have maintainers, stewards or council members responsible for overseeing faithful execution of processes or parts of processes which are not automated.

Council and token holder are pretty standard patterns in DAOs in the wild.

Contributor is defined based on sourcecred portion of the state, anyone who has any cred is a contributor because it means they have participated in the communities production of value according to how that community defines value.

Timeout is an interesting case because it directly recognizes the need for some form of sanctions to manage disputes. We kept it as simple as possible. It has magnitude precisely because sanctions need to be graduated (see Ostrom). Furthermore, we noted that without a precedent for sanctions, the first despite will quickly devolve into a dispute about disputes. This is a better initial condition than "none" because its impossible to have a healthy discussion about dispute resolutions process in the context of resolving a particular dispute.

Moderation policies are expected to evolve with the communities needs, but also new disputes should be arbitrated with the old process prior to reforming the process whenever possible. Moderation will be very community dependent so its important that this rights/access control paradigm by relative unopinionated about what rights modified by sanctions. We chosen to emphasize a case where no rights are lost permanently, but the period of the sanction is the magnitude of sanction. One could encode other sanction paradigms using special "negative roles" which are generalizations of blacklists. Positive roles can be thought of as generalizations of whitelists.

The moment you introduce AraCred you have a governance and rights/roles access problem. You then need a process to describe and discuss the rules of the game before you can figuring out what the rules actually are. What actions are available? To whom? Under what contexts?

That being said, no one likes a rigged game. No one likes watching them and no one likes playing them. If everyone's not bound by the same rules and/or if the rules change or are fuzzy things are going to get weird. People get pissed if the rules don't apply equally or if they change in ways that are unfair or unclear.

What does it mean for the world to be fair? Rights access paradigms are a way to explicitly model and reason through these things. We need to map out rights and access controls to show who can do what and how people can move through the system. This is important because meritocracy and democracy are dependent on rights access controls. If we want to make it so that the rules apply to everyone equally the rules need to change slowly in a participatory way. We have to collectively buy into and accept the trade offs. Everyone can engage in the process and have agency in that process. You should be comfortable being dropped into a random role in society because there's a path towards the role you want.